Got yourself an all-white panel? Just click on rentaminority.com

I set up a spoof website to joke about the frustrating way we deal with diversity. The response applicants seriously trying to hire a minority to keep up corporate appearances – proves that we need more than a punchline 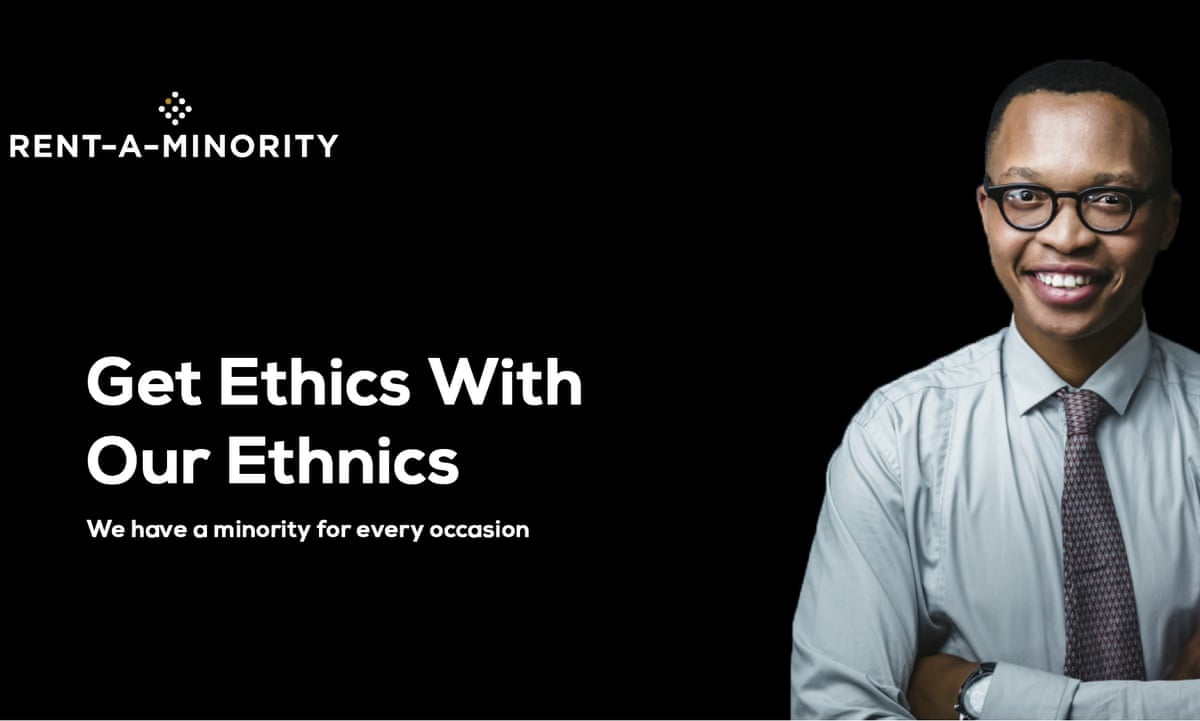 Is your conference kind of caucasian? Your award show anaemic? Your meeting massively male? Are the nasty Twitterati calling you a racist-misogynist-ableist-cis-fascist? Well, dont fear, Rent-A-Minority is here!

Rentaminority.com is a game-changing new service poised to disrupt the diversity industry. Tackling institutional inequality is incredibly inconvenient for businesses and distracts them from their primary duty of maximising profits in order to deliver shareholder value. Rent-A-Minoritys web-based platform solves this problem, allowing businesses to generate an illusion of diversity, on-demand. With rentaminority.com boasting a minority for every occasion, companies can add an exotic edge to any event quashing their quotas with the click of a button. Think of it as an Uber for diversity, just without the surge pricing. Actually, there might be surge pricing; Im still working that algorithm out.

All entrepreneurs have a lightbulb moment. As founder, chairwoman, president, emperor, and chief minority officer of Rent-A-Minority, mine came when I realised the domain name was available. From such minutiae, moguls emerge. I set up the website just over a week ago, at a New York hackathon for stupid ideas. Since then, the website has gathered a serious, and rather surprising, amount of traction: more than 91,000 visits to the site, requests for foreign-language versions, a couple of apparently genuine inquiries to rent a minority, and about 500 applications to become a minority for rent. While the majority of applicants are in on the joke (this is a joke), quite a few people do seem rather hopeful that they might actually be able to monetise their minorityness.

That some people have taken my satirical website seriously isnt actually that surprising. After all, todays on-demand economy means you can rent pretty much anything, including people. There is, in fact, a booming rent-a-foreigner industry in China aimed at domestic businesses that want to appear more western. Clients can choose from a range of colours and nationalities; there are no prizes for guessing which skin colour is the most expensive. Because a smattering of white, shows the companys doing all right!

Rentaminority.com is a ridiculously superficial approach to a complex problem, but so is much of the diversity industry. Which is sort of the point. Domain availability aside, I created the site because I felt frustrated with the surface-level manner in which diversity issues are often dealt with. From the largely positive way people appear to have reacted, it appears Im not alone.

There is a familiar and depressing cycle that seems to be played out on social media day after day. First, there will be uproar about how a leadership board, conference lineup, award show jury, etc is entirely composed of straight white men. This is followed by swift crisis management, in which the offending party makes a few token gestures to better their image. And then exactly the same thing happens again. And again.

This farcical cycle is also played out on a more granular level in the workplace. A company loudly launches a diversity initiative. A diversity officer mandates diversity training. Human resources is tasked with recruiting a certain number of minorities. The website and communications materials are updated to look inclusive. Boxes are ticked, and management pats itself on the back. Meanwhile there is no meaningful change in the businesss culture.

At best this box-ticking, surface-level approach to diversity, which prioritises differences you can see over socioeconomic divisions, is ineffective. At worst its counterproductive and divisive. The Economist recently published an article titled Diversity Fatigue that described the faint air of menace that has sprung up around the diversity discussion. Organisational diversity programmes can instil certain resentment among managers, who feel as if they are being unfairly demonised. Studies have found that enforcing diversity training can actually promote prejudice rather than extinguish it.

If you are a minority, all of this leaves you in a bit of a no-win situation. You are up against an obstacle course of institutional inequality that isnt being adequately addressed. At the same time, your successes risk being undermined by accusations of tokenism. I cant tell you how many times Ive had people strongly suggest to me that I probably only achieved something because, you know, positive discrimination. Sometimes you end up half-believing it.

A number of the responses I received to rentaminority.com echoed this. One woman wrote: The role I recently took at [a] business consulting firm was previously occupied by a very smiley woman who was ambiguously Asian. She was the only person of colour in the company, and when they hired me, I took that spot the ethnically ambiguous person of colour.

Of course, its not all doom and gloom, and its important to remember that. While rentaminority.com is clearly not the answer to institutional inequality, technology is being used to create idiot-proof ways to find diverse talent across different industries and specialisms. Websites such as Writers of Color and Black Game Devs already exist to combat the but I just couldnt find a qualified person who wasnt a white male excuse. And artists Caroline Sinders and Taja Cheek, are currently working on a project provisionally titled Databases Full of Women, which is a consolidated database of women of colour across a range of industries.

Finally, if there is one thing that my tenure as founder, tsar, chief dreamer and CEO of rentaminority.com has shown me, it is that we need to talk about how we talk about diversity. We need to get rid of that faint air of menace that the Economist references and make diversity a topic that people dont dread discussing. Anyway, thats what I think. But it may be a minority opinion.

This article was posted in Design and tagged Equality, Society.
Scroll up